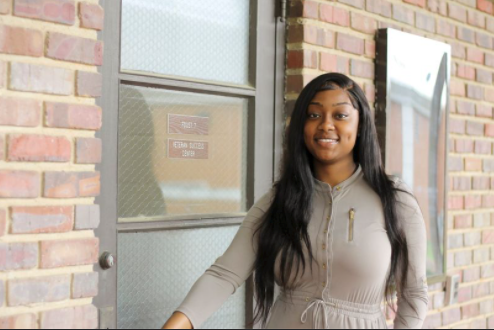 UWA has grand plans for its new Veterans Success Center

Creating additional assistance for student veterans is vital on campus In the Army National Guard, Breonsya White is an aviation operations specialist preparing for her first overseas deployment. At the University of West Alabama, she is a junior majoring in math education with aspirations of becoming a principal or professor. Later this year her unit will ship out to Kosovo, where she’ll work in flight operations. White, a Montgomery native who enlisted in the National Guard when she was 17, 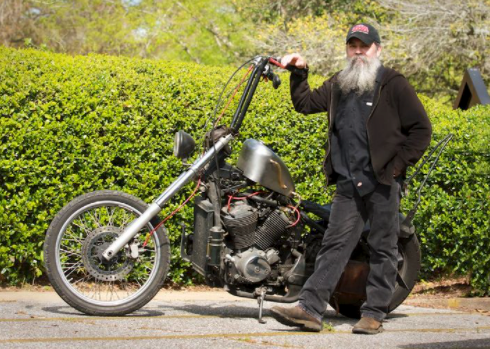 Tommy Hutchins and his Honda motorcycle are familiar sights on UWA's campus. Hutchins' dedication to quality control is vital to department's award-winning reputation If there’s any doubt that Tommy Hutchins is a bike guy, a gearhead who finds happiness while straddling horsepower, it’s dispelled in a single story so outlandish that it nonetheless must be true. “I like to enjoy the ride, but I'll ride anytime,” said Hutchins, 52, a pressman at University of West Alabama Printing Services for 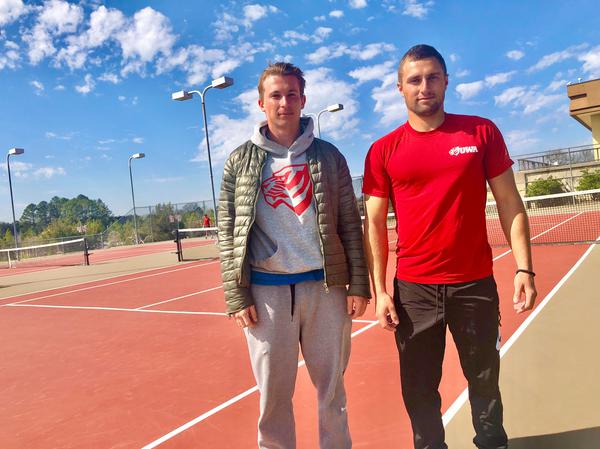 Ilia Dehodiuk, left, and Andrii Stratiienko came to UWA to play tennis for the Tigers. Ilia Dehodiuk never stops checking his phone. Never. “Literally every minute,” he says. He checks it each morning. While walking to class. Before practice. After practice. Before bed. Next day, same thing. He has to check. He must. It’s his obsession, his lifeline, his connection. “I check the news because I want to make sure that my family is safe and my city is good, because you've seen those videos of th 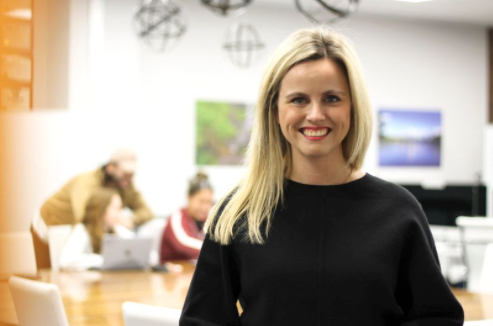 Dr. Amy Jones is chair of UWA's Department of Communications. Jones earns United in Service Award from United Way of West Alabama As silly as it seems, good-ol’ doughnuts -- not beignets from France, not baklava from Turkey, not cannoli from Sicily -- partially fueled Dr. Amy Jones’ path to the honorees’ table at the upcoming West Alabama Young Leaders Awards. Jones, chair of the Department of Communications at the University of West Alabama, didn’t eat the sweets. She instead turned a chance 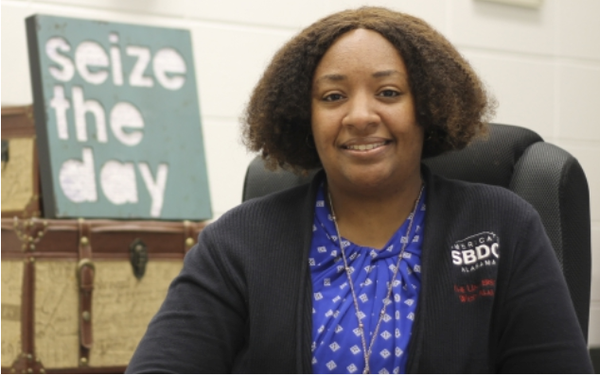 The indissoluble bond between Triplett and UWA

Assistant professor of marketing also directs DBA in rural business online program As silly as it may seem, the reason Dr. Veronica Triplett is an institution at the University of West Alabama can be traced to a long-forgotten item tucked inside a storage space in her family’s new home. That is, after all, why she initially made the two-hour drive to Livingston from her childhood home of Monroeville. Recruited as a teenaged clarinetist for the UWA Marching Tigers band, Triplett graduated with 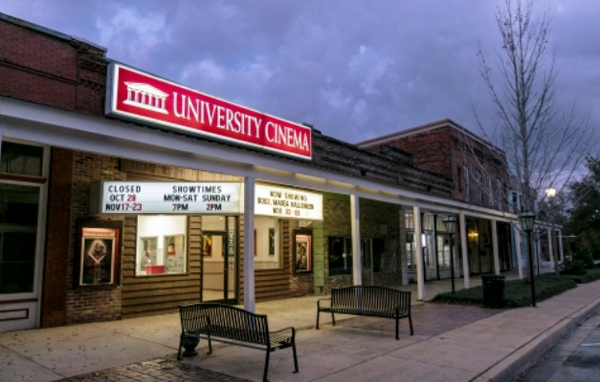 University Cinema in downtown Livingston before closing due to the pandemic. After pandemic closure, theater again poised to bring entertainment to Livingston For two years, University Cinema in downtown Livingston existed not as a movie theater, but as a time capsule for life immediately before the Covid-19 pandemic shuddered most of the world. On March 15, 2020, student workers at the University of West Alabama-owned cinema welcomed movie-goers for that night’s film: “The Call of the Wild,” 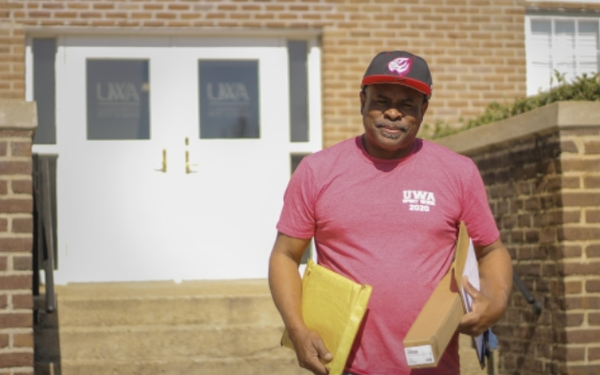 UWA's warehouse manager is an essential part of campus community Besides his ebullience and can-do attitude, Peanut Jones is essentially the University of West Alabama’s human divining rod. If it exists on campus, he almost assuredly knows where it is, how to find it, and the quickest way to make it happen. Everyone in Livingston has a Peanut story because everyone in Livingston seemingly knows Peanut, a native Sumter Countian whose diligence as UWA’s warehouse and receiving manager is renowne 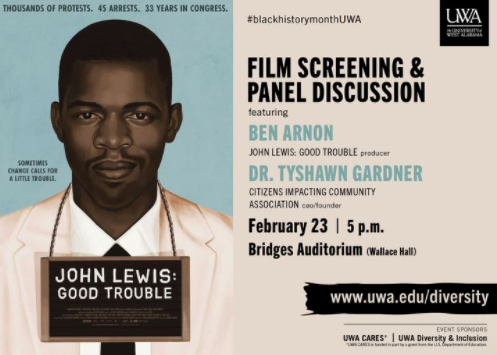 UWA will host the screening on Feb. 23. When U.S. Rep. John Lewis died in 2020, he bequeathed to the world a complex and inspiring legacy that serves as a testament to dogged nonviolent opposition and a roadmap of America’s civil rights movement. Beaten on Selma’s Edmund Pettus Bridge, attacked alongside other Freedom Riders by the Ku Klux Klan, arrested for protesting racial injustices, Lewis earned the sobriquet of “the conscience of Congress” during his 33-year career in Washington. That l 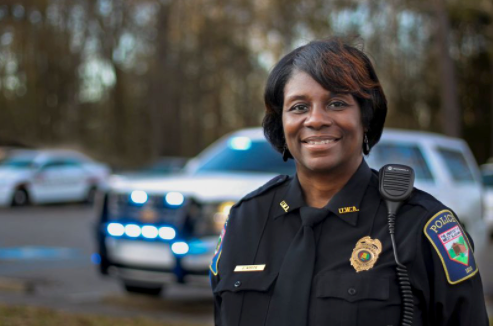 Livingston native's passion for policing is evident on campus The moment isn’t lost on Josette White. Not in the least. Strangers aren’t greeted with bouts of hyperbole when they meet the University of West Alabama’s police chief. They instead sense hints of calmness and professional sincerity. “Every day when I wake up, I think about it and it's still unbelievable,” she said. “I mention myself and I say, ‘Oh, I'm the chief.’ I'm grateful, I have to be honest. I thank God for it, sure.” When 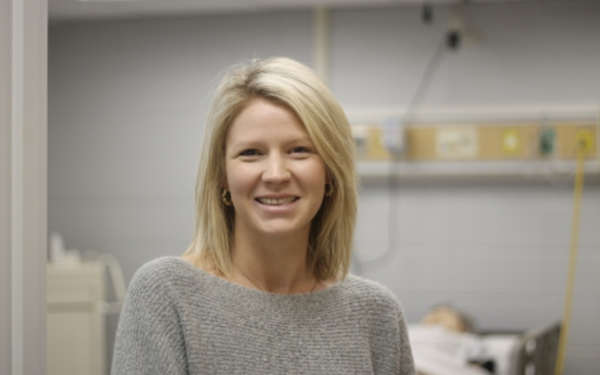 Former neonatal ICU nurse has jumped at chance to expand her UWA role Nursing seeped into Kelly McClure’s world not by accident or epiphany, but via something just as effective. Youthful curiosity, fleeting as it often is, won out. “I obviously loved helping people, but what really interested me were all the medical shows,” said McClure, an assistant professor of nursing at the University of West Alabama. “I found the human body and the way it worked very interesting to me. I liked classes li 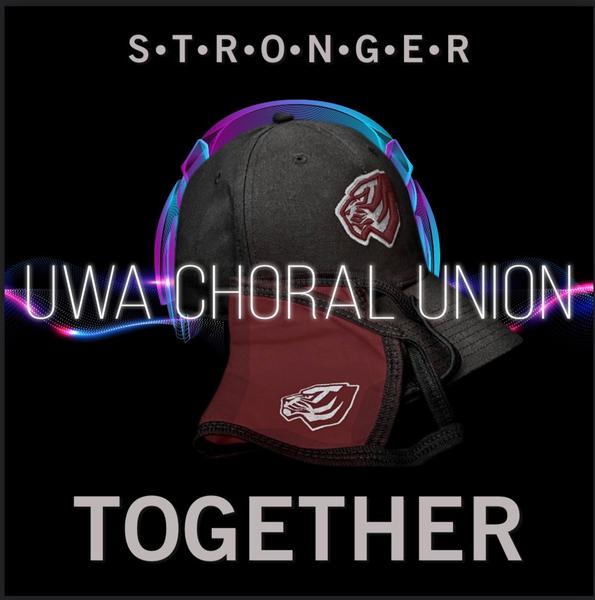 With artwork loosely based on one of rock music’s iconic images and a track listing of studio and live recordings, the University of West Alabama Choral Union’s recently released album may exemplify one trait more than all others: perseverance. On that, UWA lecturer Mark Turner, who produced the album, has no doubt. “It was both fun and exhilarating -- and very stressful -- all the time,” he said. “It was a constant combination of extreme emotions throughout the entire project.” “Stronger Tog 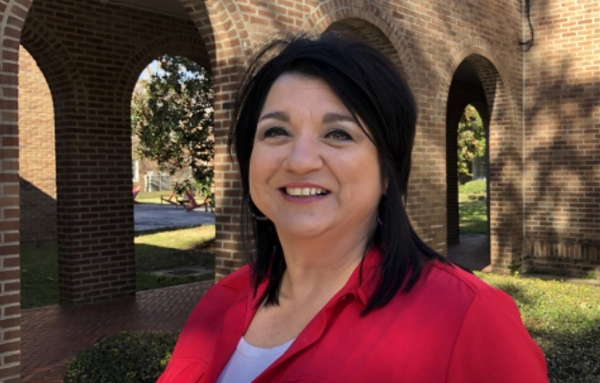 Dr. Jodie Winship has taught at UWA for 13 years. It’s the underdogs, Dr. Jodie Winship says, who tug at her heart, the unpopular, the excluded, the downtrodden, the people whose circumstances often separate them from the rest. Her explanation is quite organic. “We were poor growing up and didn’t have a lot,” she says, “so I was always for that kid who didn’t have it.” One kid in particular. Years before she joined the Julia Tutwiler College of Education faculty at the University of West Alab 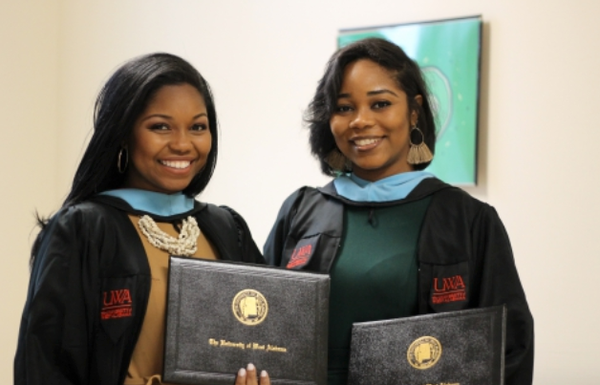 Ebony Ware-Parks, left, and Kiera Ware received their master's degrees from UWA in December. Ware, Ware-Parks enjoy their family's ties to the university There’s a symmetry that often blossoms between sisters, shared commonalities that become unmistakable. Ebony Ware-Parks and Kiera Ware could have enjoyed such a uniformity when they chose colleges. In December, Ware-Parks and Ware -- teachers from a family steeped in the education profession -- received their master’s degrees from the Univer 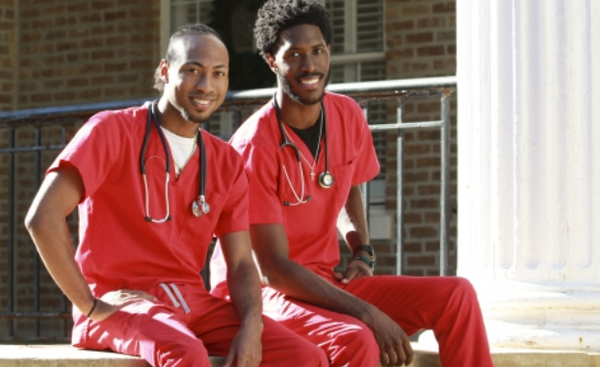 Devon Williams, left, and Cameron Preston are nursing students at the UWA. Preston, Williams are excelling in Division of Nursing program Initially, at least, Cameron Preston’s career aspirations didn’t include scrubs and stethoscopes. The University of West Alabama, where he’s a senior, was less than an afterthought. “Actually, I wanted to go to the NBA,” he said. “But God had other plans for me.” To the west, Devon Williams enrolled in community college and planned to transfer to another sc 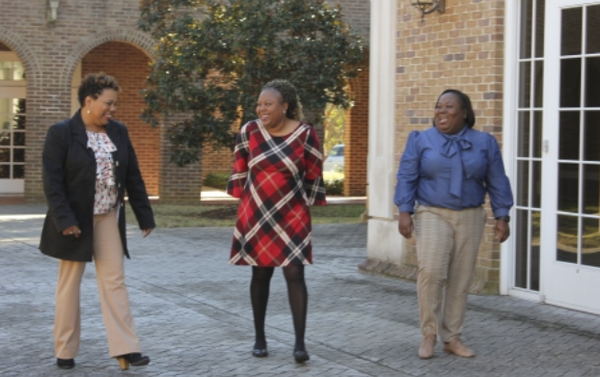 Dr. B.J. Kimbrough, Dr. Mary Hanks, and Dr. Chineda Hill are hosting several workshops in 2022 for female students of color at UWA. Goal is to help young women of color develop 'soft skills' for life, workplace Combining hefty doses of college advising and tough love, Dr. Mary Hanks and two of her University of West Alabama colleagues in January will embark on a mission to help female students of color not only adjust to life on campus, but also succeed. “Because I can remember being an 18-ye 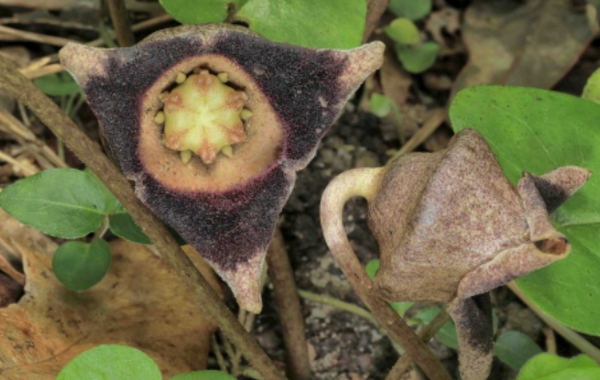 The Hexastylis rollinsiae discovered by Brian Keener and Gena Todia. (Credit: Alan Cressler) Discovery is the ninth in Dr. Brian Keener's career Alabama, says Dr. Brian Keener, is the most biologically diverse state east of the Mississippi River. Home to large-scale forests, Appalachian foothills, coastal plains and miles of waterways, it’s also a treasure trove for researchers searching for novel species of plants. Aided by the connectivity of social media, Keener, a professor of biology at 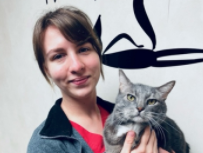 Canada enjoyed the experience of earning her master's degree through UWA Online Had she preferred, Olivia Canada could have chosen an easier path to a master’s degree at the University of West Alabama. She could have taken her time, enjoyed the process, made a few memories. But that wasn’t her choice. Instead, she sprinted through her UWA Online program in a year by taking two courses each term, all while working 13-hour shifts as a full-time veterinary technician. Sleep was rare. And this wee 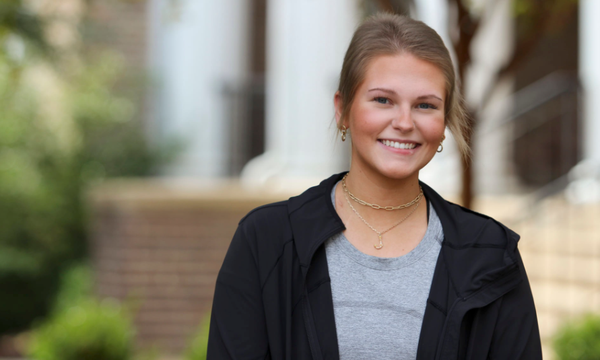 At UWA, Payne's resilience is having an impact

Julie Payne transferred to UWA after Judson College closed earlier this year. Her first school closed. Then doctors diagnosed her with Hodgkin's lymphoma. But the sophomore is excelling as an online student. There’s an unexpected comfort in Julie Payne’s voice, a soothing quality amid a slight Southern rhythm that belies her age. If you weren’t aware that providence had so recently jumbled her life, you’d believe her first semester at the University of West Alabama has been nothing short of ex 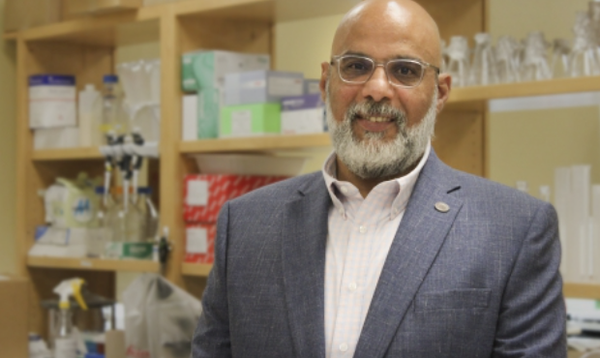 Fungi for the fight against famine

UWA’s Dr. Mustafa Morsy chosen by U.S. Fulbright Scholar Program for 9-month study at United Arab Emirates University Famine didn’t mar the childhood of Dr. Mustafa Morsy, a professor of biology at the University of West Alabama. Food for his family in Alexandria, Egypt, was readily available. “I was always thankful as middle-class people growing up that my dad was able to feed us,” he said. Nonetheless, there is an existential connection between Morsy’s childhood memories of famines in other 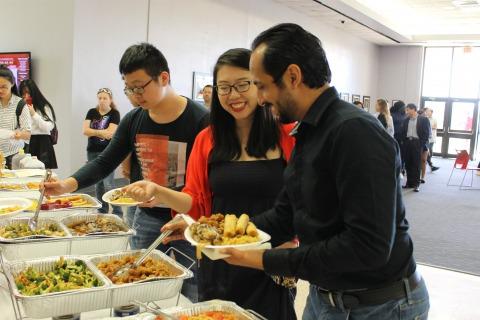